Trish Nash is the broker-owner of the Trish Nash Team and Signature Gallery of Homes. She specializes in representing buyers and sellers in Henderson and Las Vegas. She is consistently among the Top 1 Percent of Real Estate Professionals in Clark County and the Nation. Trish Nash and her team provide a high level of attention to detail in sales and marketing with strategic community outreach.

In April 2018, the Trish Nash Team approached Success City Online to learn how to leverage social media, target specific master-planned communities, and become the top REALTORS® in the city. Trish Nash is highly involved in the Henderson community, and she wants to continue to increase her company’s exposure offline and online.

To help the Trish Nash Team reach their goals, we first re-designed the company’s website. We then optimized their social media accounts to create a more professional look. To increase their brand awareness in targeted areas, we developed a social media marketing plan that focused on positioning the team as the best REALTORS® in the area. We took countless photos/videos and created content with a focus on building a strong brand and increasing overall leads. With Facebook ads, we were also able to promote their listings and successfully reached users in both Nevada and California. We also took special care in responding to comments and messages regarding their listings. In addition, we highlighted the team’s community involvement, and have shared any relevant news about Henderson to keep the team top-of-mind – which ultimately helped their brand reputation as the go-to REALTORS® in Henderson.

With our branding and marketing strategies, the Trish Nash Team have widened their audience reach in Henderson, Las Vegas and selected cities in California. Both organic and promoted posts have received an outstanding number of engagements with posts receiving up to 200 likes, comments, and shares. The team’s Instagram account also went from 20+ followers to 5,000+ followers in seven months. The Trish Nash Team is also starting to get recognized by media outlets and other social platforms as one of the top REALTORS® to watch in Nevada.

During the COVID-19 Crisis, the Trish Nash Team wanted people to know they were still dedicated to helping them sell and buy homes. We started to use pictures of the team working from home. Furthermore, we promoted virtual open houses that members from the Trish Nash Team would have on Facebook. To promote them, we created Facebook events, social media posts, and Facebook/Instagram stories. Afterward, we would post the virtual tours on Instagram to give them more exposure. The first Facebook post about the virtual open house received over 80 reactions. Additionally, the Trish Nash Team was featured in multiple articles because of their virtual tours. 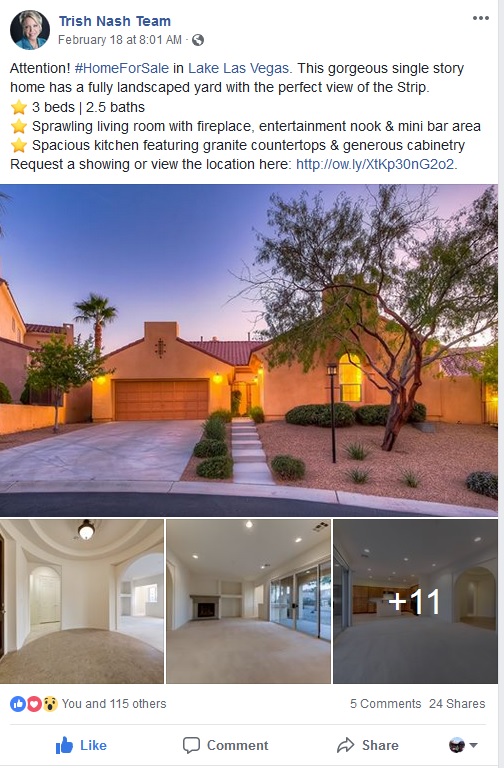